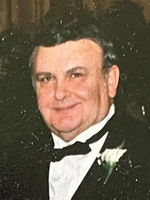 He was a graduate of Campbell Memorial High School and upon graduating enlisted in the U.S. Marines.

He was an avid Ohio State and Cleveland Browns fan. He also enjoyed mall walking daily with his friends.

He is survived by his two sons, Frank and Jerry (Colleen), both of Youngstown; son-in-law, Donny Simione of Boardman; and his sister, Rosemary Santillo of North Carolina. He was especially proud of his four grandchildren Brianna and Nick Simione and Emily and Danielle Ross.

Jerry was preceded in death by his wife, Barbara and his daughter, Pam whom he missed dearly, and brother, Donald.

Friends and family may call from 5 to 7 p.m. on Monday, April 18, 2022 at the Rossi Brothers and Lellio Funeral Home in Boardman, followed by a 7 p.m. memorial service.

Family and friends are encouraged to offer prayers for the family and support via phone call, text, email or may visit the Book of Memories at www.rossifunerals.com.

All rights reserved. This obituary is also archived at obittree.com